Comments from the audience:

"Wow! What an incredible film. Christine, your respect and kindness that you showed the victims and first responders was incredible. I hope to see this in wider distribution. Remarkable story and so much love."

"Great movie. I love how it captured such a tragic event and created a touching and inspirational loving story."

"Thank you Christine for the time you took to create and share this beautiful story of resilience, courage, and most importantly love."

"Thank you Christine and the Elvin family for telling this story. Your extraordinary courage and resilience is so inspiring to me and to all who see this movie."

"Congratulations on making a beautiful film on what could be a tough topic".

“Excellent!! This needs to be shown to the Reno Community in a large venue. It nees to be advertised so that all involved and the community as a whole can go see this fabulous account  , , , God bless you for sharing this with us.”

“Thank you for producing this movie. There are wonderful people in this town which you showed in this movie. Great job!”

“Everyone who sees Broken Propeller will get a better sense of what happened in the Air Races tragedy. Not only the cause, but the incredibly complicated effects. We got to meet all sorts of people whose lives were changed by that one event.  We got to see how some of the people most directly affected dealt with such a crippling event. And we got to see healing.”

“Your movie does what every documentary strives to do – to inform. And it offers a bonus few documentaries do: It makes us feel good about humanity, our community and ourselves.”

“The best piece of music in the whole piece was the closing “Recipe that Cannot Fail.” It was such a surprise to learn that you had it created from a poem written in youth by a victim of the crash. You obviously found a very good songwriter, because it was as catchy as it was beautiful in wording. That was a wonderfully uplifting way to end the film.”

At a private showing of "Broken Propeller". 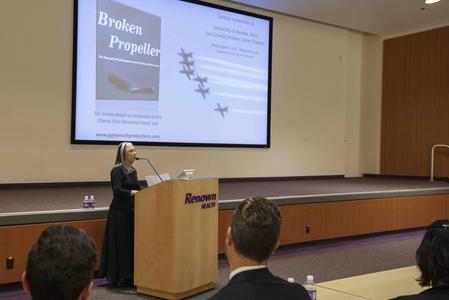 Comments from people who purchased the DVD:

I wasn't at the races in 2011 and after growing up with the races since 1964, I'm glad I missed that one. I was watching the live streaming and the plane must have come right over the camera guys as they were at the top of the stands. The sound was unbelievable!! When they raised the camera back up the dust and debris was still settling and the carnage was right in front of the camera. It was horrendous to see limbs lying around and legless/armless people. I also saw people rushing to help these people. Right into the carnage they went getting belts and ripping the box cloth to make bandages. I am so grateful to you for doing this documentary. So many know of the crash and the deaths/injuries, but so few know what happened to these folks afterwards. Frankly I feel many want to keep their head in the sand about it. The reality is; it happened and some extremely selfless, caring and truly wonderful people gave their all. The Vietnam era Huey helicopter was there for the NAFI restored plane competition. Those guys fired up that beautifully restored bird and were loading the walking wounded aboard before the stands cleared.
That Reno had a 2012 race and has continued each year is a feat many deserve credit for.
Thank you for highlighting the many unsung heroes of that terrible day. It's a doc everyone that was there or enjoys air racing should see. Most won't just because. Few know the story of what happened after the crash as the news people wanted the sensational crash news, not what was happening to the victims. My kindest regards to you and the many at the airport and the hospital for being true professionals in every way.
Thank You Christine,
Keith Osteen
Brevard, NC
​

I just finished watching this documentary. Was it hard to watch? Yes. But, the stories of the first responders- from pros to walking-wounded fellow fans- to the ambulance crews to the trauma doctors and nurses to the physical and mental therapists helping both the wounded AND their care givers long after the event are gut-wrenching but so very admirable. The incredible (very) extended behind-the-scenes Reno family members who respond to such a disaster is something most people probably do not think about. The story of the family that is the focus of the documentary is heartbreaking but the way they are handling their fate is heartwarming and sets the standard for others.

The fact that these surviving fans keep returning to the air races is unbelievable to me. Reno fans truly are special and unique among sports spectators and the trauma capability in the Reno area is extremely well organized and capable. The importance of the air races to the extended family was also something that is emphasized.